The muncipality of Gamvik kommune

The Municipality of Gamvik on the east coast of the Nordkyn peninsula has about 1100 inhabitants. The Municpality center is Mehamn. The natural surroundings in the area are rich and varied, with excellent fishing in rivers and lakes and variety of cultural activities. The economy of the municipality is centered around fishing, fish products, and export to many parts of the world. The airport at Mehamn has daily connections whith the rest of the country, and the Coastal Express calls twice a day at Mehamn. The 16.august 2007 the new road RV 888 (Bekkarfjord-Hopseidet) to Nordkyn peninsula was officially opened. 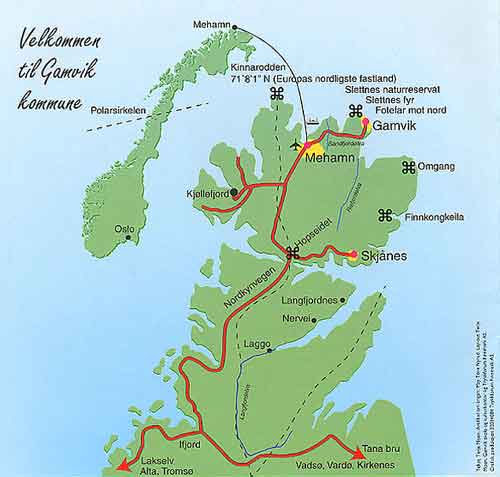 According to the meteorologists, it's never summer in Gamvik, A summer month, by definition, has an average temperature above 10 C. At the lighthouse at Slettnes. August is the warmest month with 9.6 C. So, Gamvik actually only has winter, spring and fall, but do have midnight sun and long periods of fine summer weather. The average wind force is high. In January 1995 the records showed a strong breeze or more for 21 days, and the "Nordkyn Road" from Bekkarfjord to Hopseidet, which passes through very rough terrain, is snowplowed most of the winter.
At first sight the vegetation may seem sparse. The lack of trees and shrubs and the wide expanses of stony "desert" give a strange impression. However, plants life not at sparse as one might think. More than 350 different species of plants have been registered at Nordkyn. The plantlife is largely similar to what is found in the mountains of southern Norway, at altitudes of 1000 to 1500 m. So the mountain flora at Nordkyn flourishes side by side with the grasses of the beach.

The traces of previous habitation on the peninsula tell us that people have lived here for more than 10.000 years. Fishing and agriculture have always been the main occupations for both inhabitants and seasonal workes. The good harbor and the short distances to the fishing grounds were especially important. The Pomor Trade, which lasted until 1917, was primarily trading with the Russians. Fish was traded for flour and other vital goods. At the end of the 1800 century, the well known whaler and inventor Sven Foyn, built a whaling factory in Mehamn that was the largest of its kind in Finnmark.

When the fishing failed the fishermen blamed the whalers. In the Mehamn uprising on 2. June 1903 , non-local fishermen tore down and destroyed the factory. Soldiers had do be called in to restore order. Since the stock of whales had sunk drastically, the factory was never rebuilt, but Mehamn will always have a central place in the history of whaling.

Gamvik Museum at Gamvik is a natual place to stop on the way to the lighthouse at Slettnes. The exhibition at the museum aims to give a picture of the local fishing village through the ages, of working life and other aspects of daily life. Exhibits include a fisherman's cabin with fishing gear and equipment, a kitchen from the period between the World Wars, a series of pictures depicting the "Mehamn uprising" and various fishing villages on the peninsula. The museum also includes a zoological exhibition showing the rich animal and plant life of the region, minatures of the buildings before the Second World War and authentic equipment from the lighthouse at Slettnes. Books about and pictures of cultural and natural history are on sale at the museum shop, as well as a visitor's certificate for the lighthouse at Slettnes.

The lighthouse at Slettnes - the most northerly mainland lighthouse in the world lies 4 km, north of Gamvik. The lighthouse is at the same latitude as the northern tip of Alaska.
The Slettnes Natural and Cultural Heritage Area.
One of the most important nesting places for wading birds in the Nordic countries lies to the west of the lighthouse at Slettnes. More than 16 species of wading birds have been found nesting at Slettnes, in addition to a large number of other birds (including the second largest colony of Arctic skua). Slettnes is also of great importance to migrating birds on their way to other nesting places, both spring and fall.
Few other places in Finnmark include such rich traces of previous fishing communities as Slettnes. The ancient cultural landscape lies fallow today, and monuments from the past lie side by side: the founddations of houses gravesites, remains of Sami turf huts and of old stone fences. At Steinvåg you will find one of Norway's best preserved stone labyrinths. There are several theories as to the age and function of the labyrinth. Most of these labyrinths lie close to Sami gravesites dating back to pre-Cristian times. Others link the labyrinths with the Russian activities in the 19th century.

Gamvik Church - a beautiful post-war church was built on the same spot as the old church,which was a reliable landmark for fishermen in its time.

The Brodtkorb factory in the center of Gamvik is a factory for fish products that was built just after the Second World War. The production was mainly based on drying and salting of fish, export of fresh fish to England, raw materials for the canning industry and production of cod liver oil. The Brodtkorb factory is included on the Central Office of Historic Monuments' preservation list for technical and industrial heritages as the only object of national interest of its kind.

Kinnarodden - the northernmost point on the mainland of Europe at 71 8'1" is a seven-hour hike from Mehamn. At Second World War two Junker 88 planes crashed on the top. In 1999 both planes were moved to the National flight museum in Bodø for precervation.
A recomended path for a hike to Kinnarodden is marked in the terrain with piles of rock and a map is available from Gamvik kommune. It is recomeded to use sufficient navigation aquipment for a hike in this area. Read more ....

Slettnes Lighthouse
Tel: +47 78 49 62 12 - Adress: Slettnes fyr - Map
Kafé, kiosk and bar, fully licenced. Slettnes fyr is the nothernmost lighthouse in the world at the mainland. One of the most important nesting places for wading birds in the Nordic countries lies in a short distance to the west of the lighthouse.

WWF Ecostation Slettnes
Phone: +47 78 49 71 72 - Cellular phone: +47 47 87 11 52 - E-mail: slettnes@gmail.com
Adress: 9775 GAMVIK - Map
WWF Ecostation Slettnes is situated at 71 deg.N. The station was officially opened to the public 2001 in Slettnes Nature Reserve, Gamvik community. The site is one of the most important breeding areas for thousands of shorebirds in Scandinavia, and became a RAMSAR site in year 2002.

OFFICIAL TOURIST INFORMATION ON THE ROAD TOWARDS GAMVIK KOMMUNE

WE WISH YOU A PLEASANT STAY IN THE MUNICIPALLTY OF GAMVIK